A Life in Law

The paths into the legal profession are many. In honor of Black History Month, several African-American attorneys and judges shared their inspirations and talked about life in the law. 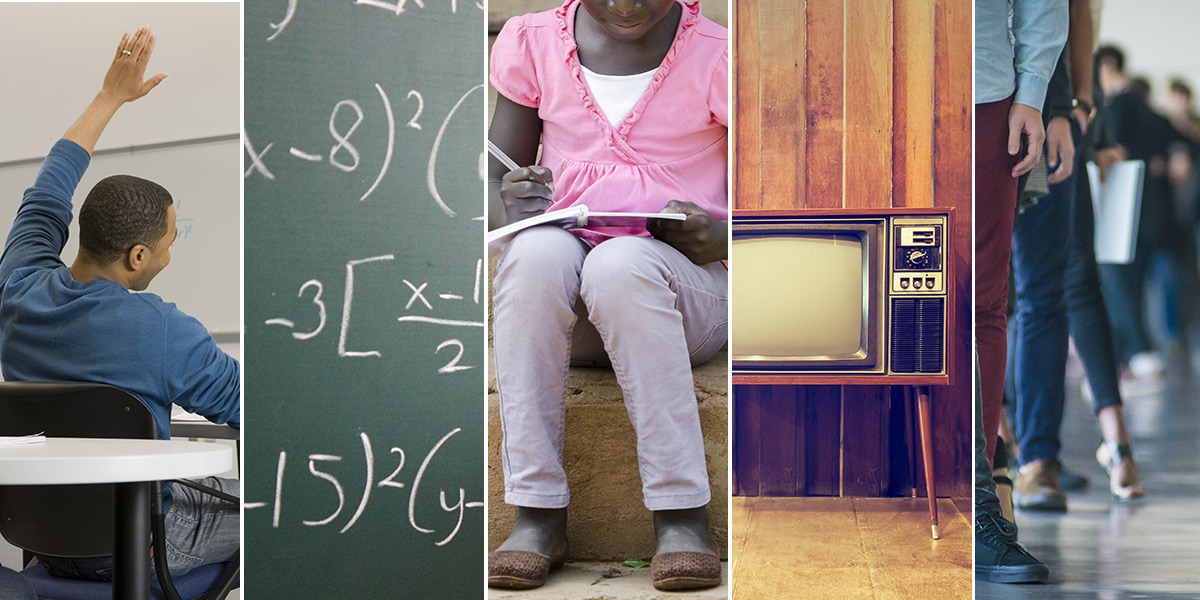 As an undergraduate, Brandi Stewart studied English and was interested in politics and government, obtaining a minor in political science. But she wasn’t sure what she wanted to do next. Her direction crystallized when her mom came across a letter Stewart had written to herself in the third grade about what she wanted to do when she grew up. In it, the Louisville youth expressed a desire to “go to law school and become a police officer.” Stewart, now an assistant U.S. attorney in the Dayton office of the U.S. Attorney’s Office for the Southern District of Ohio, said the letter solidified her decision to become an attorney. 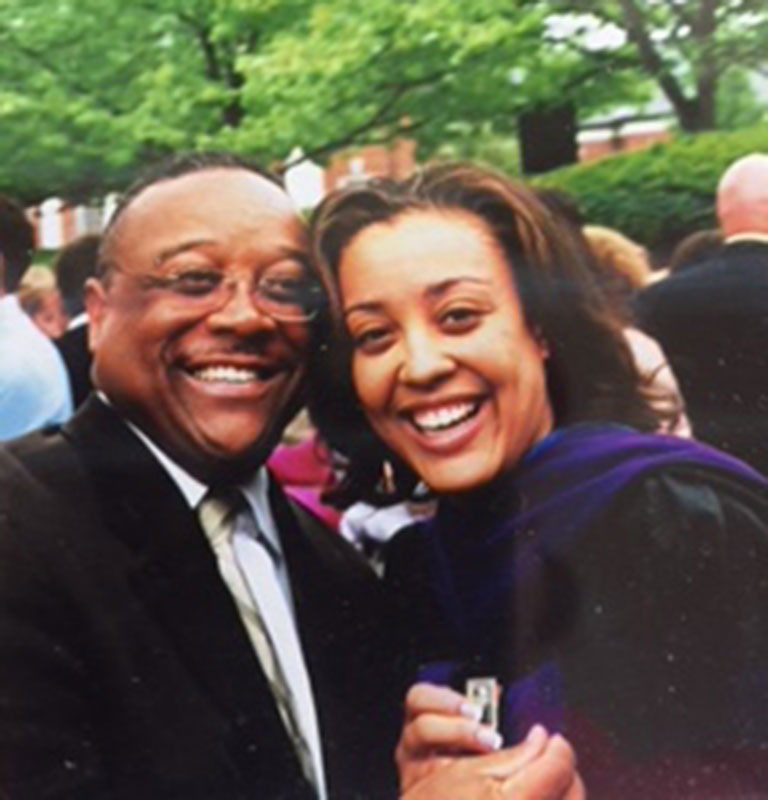 “As an African-American attorney, the opportunities I have now exist because others opened the doors.”
— Brandi Stewart
Stewart's father, attorney John W. Stewart, gives her a Thurgood Marshall lapel pin at her law school graduation.

For Judge Stephen L. McIntosh of the Franklin County Common Pleas Court, a certain serendipity and pragmatism combined to play a role in his career destination. Drawn to history in high school in South Carolina, Judge McIntosh headed toward the history line at college orientation. But the line was too long, he said, and he instead signed up for political science – a shorter line. Exploring pre-law classes, he heard attorneys speak at an event and was intrigued. Law school followed.

Judge Annalisa Stubbs Williams, who serves on the Akron Municipal Court, described her fascination with legal procedurals on TV as a child growing up in Youngstown public housing.

“Watching shows like ‘Perry Mason’ and ‘Judd for the Defense,’ I learned it was important for justice to be found in spite of any assumptions about someone’s supposed guilt,” she said.

Because of a lisp, Judge Williams endured laughter from people when she shared her dream of becoming a lawyer. Her mom took her to speech therapy, and Judge Williams graduated from college in three years, earned a master’s degree in urban studies, and went on to law school while working full time. 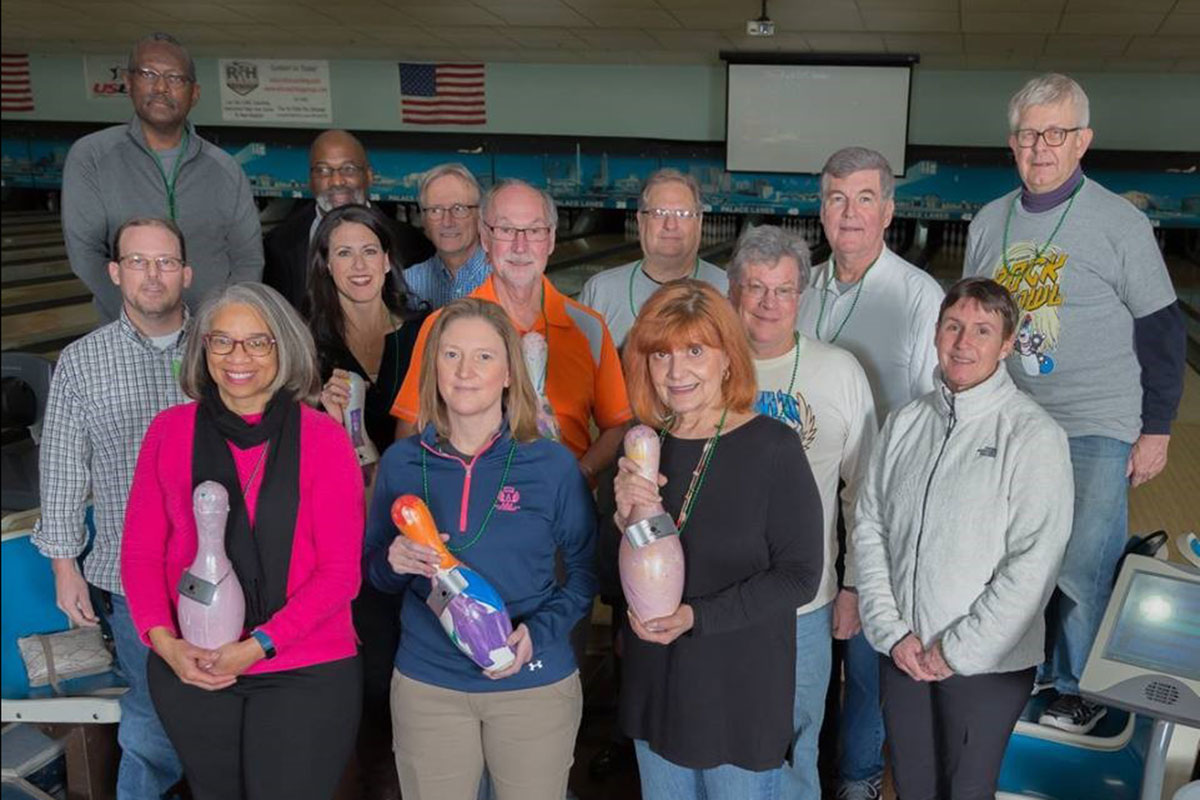 “It's important to emphasize that African-Americans have always been a part of and have always contributed to our country.”
— Judge Stephen McIntosh —

The judge (back row, left) knocked down pins and raised funds for a Columbus childrens' hospital at a bar association bowling event.

“I found that if you studied hard and were kind to people, you could succeed,” she said.

In Judge Michelle Earley’s case, a knack for numbers could have added up to a career in the computer or technology industries. The Cleveland Municipal Court jurist graduated from college with a degree in business administration, specializing in information systems. It was 1996, when concerns loomed about Y2K, the effect the change in millennium to the year 2000 might have on computers. But something kept harkening her back to her childhood passions for advocacy and fairness.

While the business degree was practical and she may have reaped substantial financial rewards from that career, Judge Earley decided to apply to law school while still in college. A nearby law school offered her a scholarship to attend. 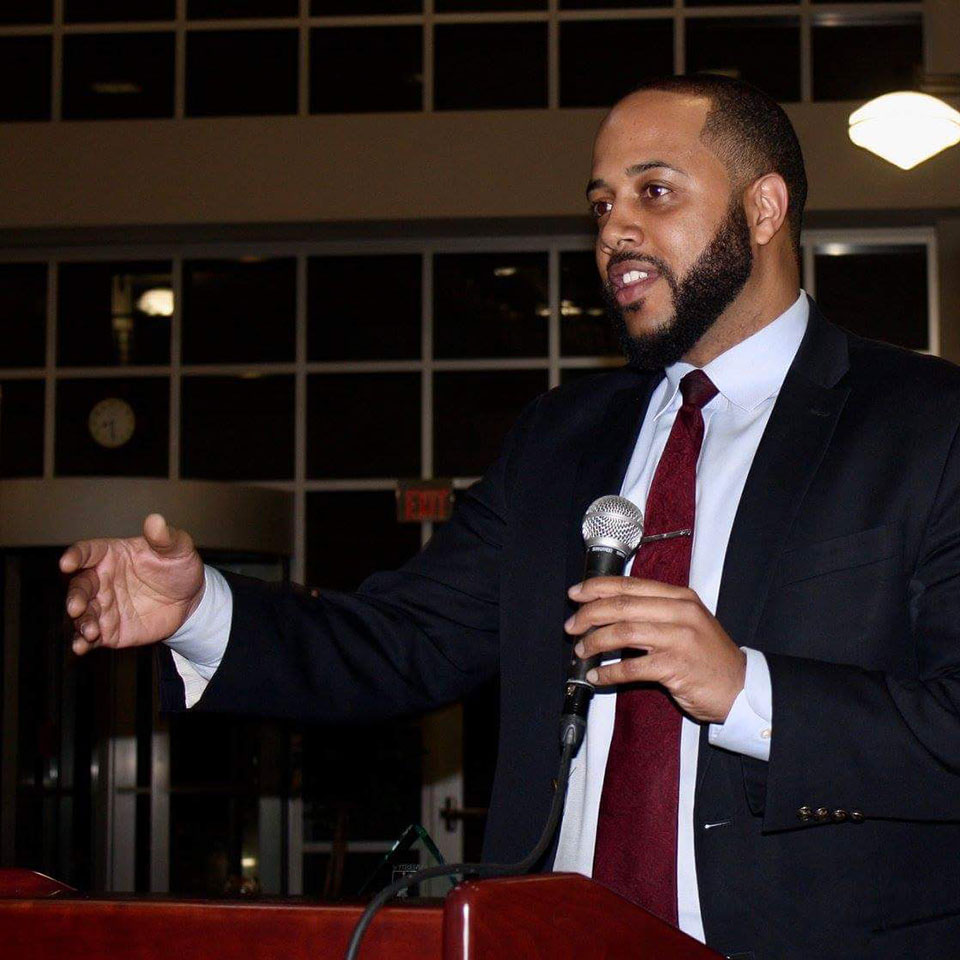 “In our increasingly diverse world, evidence shows that more diverse workplaces are more efficient at creating solutions. Our perspective is an asset.”
— Robert Gresham
Gresham speaks with the University of Dayton School of Law Black Law Students Association.

“I discussed my options with my mom, and she told me, ‘Follow your heart,’” Earley said.

A mentor helped point Dayton attorney Robert Gresham in the direction of law. Gresham wrote many papers while pursuing an African-American studies degree. He said he tended to offer more questions than prescriptions in his assignments, often wondering in writing how to create change. A professor suggested to him that the best way to manifest change might be the law.

“The law gives you the platform and the skills to impact a community directly,” Gresham said.

Addressing Tangible Issues, Serving the Public
Most satisfying for Gresham is helping people who wouldn’t be able to deal with issues in the legal system if left on their own. He recently switched from handling civil cases on the defense side, often representing hospitals, to working on civil rights issues, such as police brutality. The step has allowed him to incorporate his commitment to community service into his daily legal work.

“I have opportunities to talk with leaders and legislators and to begin conversations for change,” he said.

Stewart and the judges also emphasized helping others as one of the most fulfilling parts of practicing law.

“Ultimately, we are here on behalf of the people of the United States, and behind the umbrella of the agencies that we serve and issues that we tackle are real faces and real people,” Stewart notes. She assists the Postal Service, Veterans Affairs, IRS, Wright-Patterson Air Force Base, and other federal agencies with legal matters. “When I started here, I was told, ‘We’re not here to win or lose, we’re here to make things right.’”

Judge Williams loves the human dimension of the municipal court, where she presides over a mental health specialized court among her other duties. To assist women on probation, she launched the Peace of Mind Project for Women.

“I’ve been asked to run for judge on other courts, but this is where I make the most difference. The municipal court isn’t just the ‘people’s court,’ it is a problem-solving court,” she explains.

Judge McIntosh has practiced in many different areas within the legal profession, including working as a prosecutor, handling business matters at the Secretary of State’s Office, and taking on civil cases in a private firm. He expressed fondness especially for his time as a law student assisting in the Columbus Night Prosecutor’s Program, perhaps foreshadowing his choice to later become a city prosecutor. 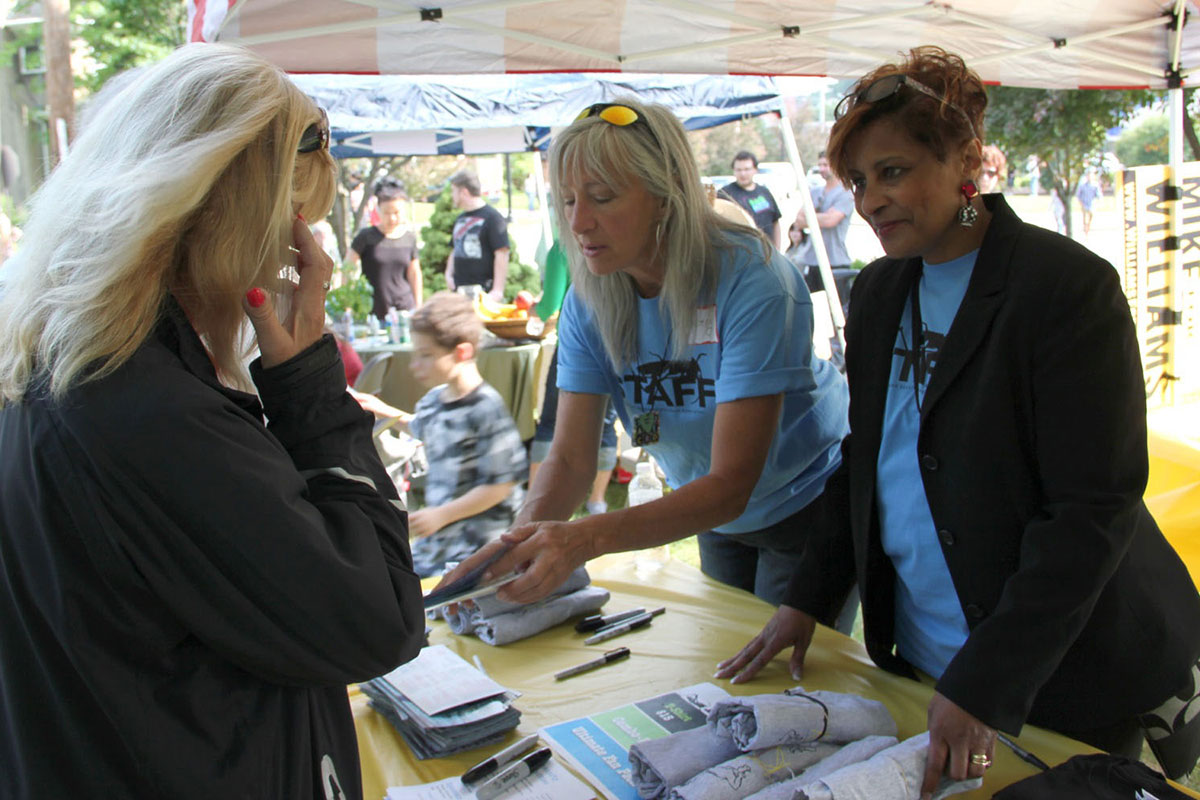 “I'm grateful that the media and teachers take the time this month to focus on African-American history with the public and students because it is American history.”
— Judge Annalisa Stubbs Williams —

The judge helps at the information booth at the PorchRokr Festival in Akron.

“It might be a domestic violence matter or property theft,” he said. “All were real issues people are dealing with in their lives. It was the best experience.”

In fact, when the opportunity to run for judge arose, he thought it might be boring. But he pursued it because he thought he could make a difference. And he discovered it’s not tedious. 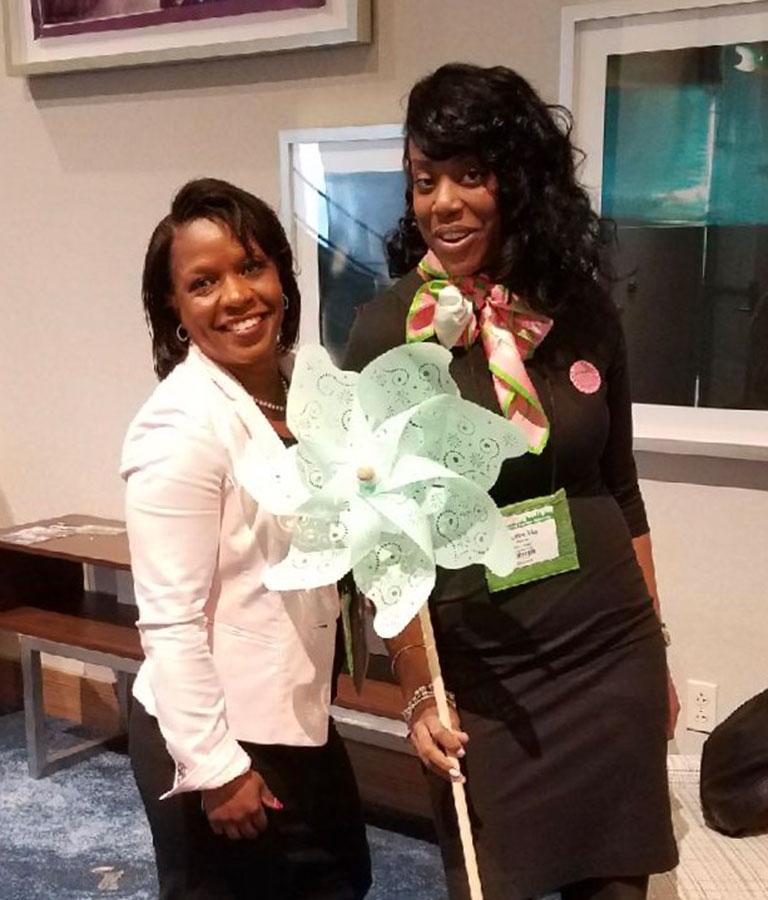 “It's difficult for people to perceive fairness in a system where no one looks like them. When people see someone who looks like them in a leadership role, they think, ‘I can get there too.’”
— Judge Michelle Earley
The judge spends time with a young woman attending her college sorority's conference.

“I see everything, from F-5 drug possession charges to capital cases, and every sort of civil issue out there,” he said.

The impact that serving on the bench has on so many in the public also has been compelling for Judge Earley.

“As judges, we have the opportunity to make a bigger difference, to touch people’s lives, to make sure justice prevails,” she points out.

More Community Service, Access to Justice, and Advocacy
These lawyers and judges also see openings for improvement in the legal field.

Gresham wishes more lawyers were more engaged in their communities. Maybe doing additional activities seems overwhelming to lawyers who put in long work days or judges who are juggling complicated cases, but Gresham said someone once told him, “Stay in your lane.” Influencing one person on an issue in an everyday conversation or helping mentor someone an hour a week is just as important as solving society’s big problems, he suggests.

“Sometimes we become too focused on the macro rather than our own sphere of influence,” he said.

Stewart is concerned about how cost-prohibitive it is to obtain good legal representation today and how that can impair access to justice.

“We as a legal community should have a vested interest in protecting everyone’s constitutional rights,” she said. “The public’s perception of justice can be tied to a person’s ability to receive a fair trial and obtain access to legal representation when issues arise.”

In that same vein, Judge Williams would like to see more advocacy, more civil rights activists like former attorney and U.S. Supreme Court Justice Thurgood Marshall. When she was young she said she saw a greater number of lawyers who tackled civil rights issues.

“They saw injustice, and they not only would speak out against it but also would take on those cases in court,” she notes.

The passion of these lawyers and judges for the profession they chose infuses their discussion of the law.

“I’ve always thought of the law as an instrument to obtain justice,” Judge Earley remarks.

Lawyers gain an understanding of the law, and that knowledge helps to ensure people’s rights, she said, and law can be an equalizer.

In a case she oversaw, a young man was in court for spray-painting buildings. She said his behavior seemed annoying, not dangerous, and he was drifting – not attending school and smoking marijuana. Programs were identified that taught him greater respect for his parents, changed his drug behavior, and got him back in school. The court addressed more than what he had done, but it examined why he was in trouble, Judge Earley said. It took some time, but at the end of the process the man thanked her for helping him, and even said he would miss seeing her.

“The law makes us mindful of different resources and connections and allows us to use the tools of the profession to change lives,” she said.